I think you guys get the idea.  The Beach!  Because I’ll take any reason I can get to go there and to share some pics of the beach with you.  And when you’re talking about perfect pairs, like the theme is for this (late) week, then what else is more perfect than all those little things I mentioned?  Not much that I can think of 🙂

So as you know, I took a little fall trip to the beach the other weekend with the family.  Though it’s always a little sad to go there when it’s cold, because you can’t enjoy lounging on the beach all day and swimming, it’s not sad enough to make me not go.  I really could go any time of year.  I’m always craving those hot summer days, though.  Going in the fall does have its perks, however.  Mostly everything is still open, it’s not freezing cold so you can still be outside and enjoy it, and it’s much less crowded — more beach for me!  Plus, there is this beautiful things called off-season pricing — you get the nice beachfront rooms, which are insanely expensive during the summer, at a pretty good discount.

So with that, we were lucky enough to get one of those rooms, and had the luxury of being able to just wander out to the beach at sunrise every morning.  Yeah, I said I was going to sleep in a recoup on my fall break, but that didn’t happen, and I ended up waking up a little earlier than I normally do.  All for a good cause, so I didn’t mind it.  Especially since my favorite little part of the beach made a reappearance.

Over the years, the scenery at the beach of Ocean City and Bethany Beach has changed quite a bit.  Because it’s just this tiny little peninsula of a town, realistically, it shouldn’t be there anymore.  Since people have built it up to be this huge tourist attraction, however, they have also put a considerable amount of effort into beach preservation and restoration.  They’ve built up dunes, planted plants, and even pump sand from far off shore to build the beach every winter.  It’s been a little sad seeing things change from when I was little; if you couldn’t tell already, I’m sentimental, and I like things to stay the same.  I used to love the boardwalk at Bethany — you used to be able to sit there, feet dangling over the edge, and just stare out at the ocean. Now, they’ve built a dune up so high you can’t even see the ocean from the boards.  The other thing I missed was the rocks.  I don’t know why I loved them so much when I was little, but I did.  My brother and I would climb on them and explore them, even though you weren’t really allowed to.  It was the best spot to find shells if you did a little digging around them.  And I just thought they were pretty.  While they were some of the earlier efforts to preserve the beach, I was sad when they were covered up by other methods.

So just about a week or so before we went to the beach, hurricane Joaquin hit the east coast, and that always makes things interesting.  My parents, who got there a few days before my brother and I did, kept telling me that there was this “huge drop” by the dunes, but I didn’t really think much of it.  Storms, particularly large ones like this, commonly move quite a bit of sand around, but nothing drastic.  Well, I was wrong.  When I got to the beach, I was surprised to see that the dunes looked like they were cut in half.  When approaching it from the boardwalk, they looked the same, but once you got near the top, you could see that there was a drop about 15 feet down — they really took a beating with this storm.  Not that I mind, I want them gone!  But along with all this sand movement, my rocks reappeared!  I was so happy to see them, as silly as that may be.  It made me think of all the fun summers spent at the beach while I was younger, and gave me something new to photograph during my sunrise sessions!  So while I’m sure they’ll be gone by summer, I was happy to see them for the weekend.  Enjoy the rock pictures, as well as a few from my favorite bay side sunset spot 🙂 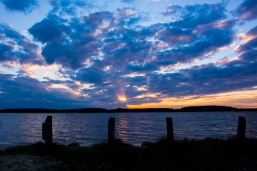 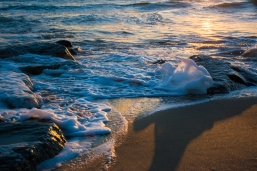 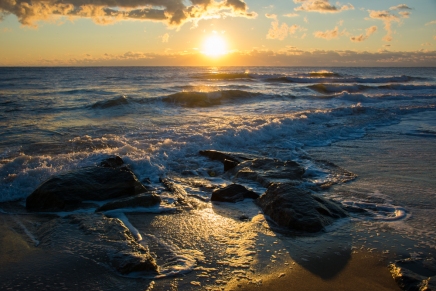 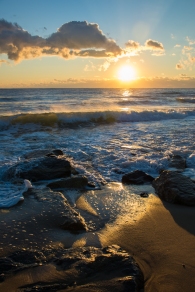 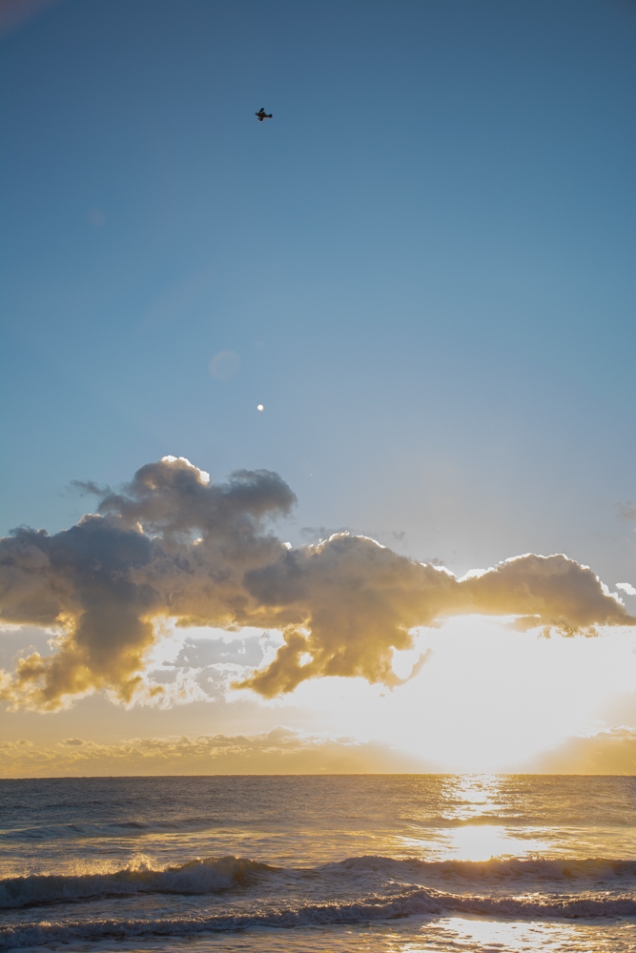 I’m so thankful for days off.  Before I started classes, my advisor told me that working while taking six classes would be an overwhelming work load.  I, in my naivety, laughed it off, thinking to myself, “if I can deal with (enter hellish former employer name here) and go to school full-time, I can totally handle this!”  Well, while I am handling it, and doing well might I add, I’m up to my neck in work, and gasping for free time.

So to my surprise as I was looking through the academic calendar a little while ago, we get a fall break.  Rather, we had a fall break — it was two weekends ago, but it was amazing.  Apparently this is a pretty normal thing, though I’ve never heard of a school doing it before.  Either way, I’m grateful, and even more grateful for the fact that I got to spend part of it at the beach.  So watch out!  Here come the beach pictures again 🙂 Don’t worry, they’re not all the same!

Even with all my busyness, I’m trying to keep up this blog!  I’m really happy that I started this little project, and I hope you enjoy it too.  It’s hard to believe I’m working on week 39, and that’s a few weeks behind!

Getting down to business now, week 39, yikes.  The theme for this week is “muted tones”, which I really had fun doing during my little post production process.  Kind of like the cyanotype and black and white beach photos I’ve mentioned before, there’s something incredibly charming when I take photographs of the beach and make them a little different than one may expect.  You all know I love the ocean — sunsets, sunrises, and all the pretty views you can imagine.  What I’m starting to like more and more is when they’re muted or monochromatic, either with another process, or just shot in black and white.

While fishing with my family that weekend, I thought it was the perfect opportunity to take some pictures to use for this theme.  Fishing, though we’ve always enjoyed doing this on occasion ever since I was little, is something I’m a little on the fence about.  It’s fun hanging out and having a “competition” to see who catches the most or the biggest, but I always feel a little guilty about it.  I know, I might be a little bit of a sissy, but I never liked hurting the fish!  I try not to think about it too much, and I suppose the fact that my dad and brother constantly tease me about not baiting my own hook makes it a little easier.  It brings out my competitive side, but there is logic to my apparent sissyness.  I mean, I can’t touch a dead fish while I’m going to be multitasking fishing with photography, right?  We’ll just say that was my excuse for nearly my entire life… 🙂

So with that being said, here are a few pictures from the most recent family fishing excursion.  As you can see, my brother caught a monster stargazer fish, which we had to reasearch, since none of us had ever caught one before.  And yes, I caught some fish too —  1 1/2 to  be exact!  The 1/2 fish is because just as the fish was coming out of the water at the surf, it got away. I say I caught two, since everyone saw it, but I’ll take the credit of a “1/2 fish”, as the debate on what constitutes as a caught fish was quite extensive.  Oh well, I had to try.  Enjoy! 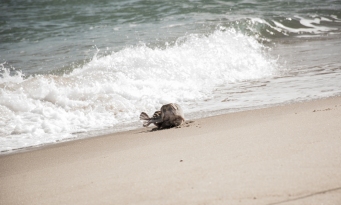 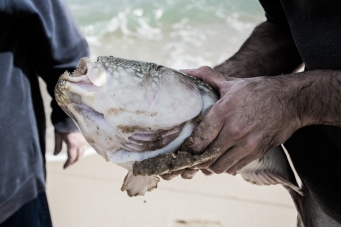 That’s my bro — he’s pretty surprised at the fish, and the crowd it drew!

casualties of the sport

Lovely!  This week I have a blank canvas, so to speak.  I have enjoyed working through nearly half of this 52 week challenge, but what has been an unexpected challenge is how blocked I would be when working with specific themes.  I suppose it’s good, and the purpose of this whole thing — not only do I have to constantly get out and shoot, but I also have to think out side of my own box.  I’ve enjoyed some of the themes more than others, but beyond that, I have enjoyed working in ways I would have never thought of on my own.

Now, back to the good old stuff…

Working in shades of grey has me thinking of one thing — black and white photography!  I mean, what else could it be?  Ok, it could be a lot of things, and just as I’m typing it, I’m thinking of tons of ways to capture this theme without taking it so literally.  But the one thing I’ve missed about working with film are the beautiful tones of the blacks, whites, and greys developing in the darkroom.  And the smell?  Yum, weird, I know, but I love it.  Ok, so there are a lot of things I miss, but I digress… Even though I would love to, I can’t do a film project for this theme.  Being out of school has been fun, and weird, but it’s also left me without the resource of a dark room.  So for this week, my digital files will just have to imagine they’re film, and my computer will become its own imaginary little darkroom.

I suppose this theme is coming at the opportune time… I am in a rather “grey” period of life….like a dark slate, thunderstorm, type of grey.  So while I’ll be working in the spirit of the darkroom, I’m probably not going to produce any more of my happy little nature photographs again in the near future.  And with that, I’m off to think, and to reminisce.  Here’s another film project from a past class of mine.  It was the first “story telling” type project that I worked with, and out of all the different ideas that I had, this was my favorite.  I liked that it told a story in so many different ways, without actually saying anything direct.  It allows you to look at it and interpret it as your own story, and to me, it has many meanings, which is in a strange way kind of cathartic.  Changing of seasons, passing of time, a year going by, life passing you by, standing still, running in circles, travel — just a few of the meanings this has to me, and, just a few of the things I’ve meditated on while looking at these photos.  So enjoy, and feel free to leave me a note of what you think!