I love it when I get a chance to do something a little different.  As you know, I’m always having problems finding models for my projects, so when I saw that this week’s theme was “environmental portrait”, i.e. taking a picture of someone in their environment, I was a little worried.  It took me a while to think of the idea, but I decided to go out and trying something today!

I usually have off on Mondays, so that’s my big “catch up” day for projects, school work, and whatever else I have going on.  Today, however, was a beautiful day, so the motivation to work on things in doors was just non-existence.  Instead, I went out and got breakfast, drove around a bit, got a coffee, took some photos outside for another week’s theme and just kinda hung out.  Then I thought, well geeze, I’m really putting off this portrait one, so I better get to it.

I know I’ve mentioned before that I play the guitar.  Not as much as I’d like to, but I still play it once in a while, and I will always love it.  Ever since I’ve started, I’ve gone to the same little shop for everything.  Atomic Music — they’re basically amazing.  So in my goofing off today, I wandered into the store and did something I never do: took pictures of people, with their permission!  Well…kind of….

I started talking to one of the guys who worked there, Mark, and he was super cool about the whole thing.  I told him that I was working on a project, and when you say that, people automatically assume it is for school.  He told me to take my time, and enjoy myself, which I did.  I wandered around the aisles browsing all the guitars and amps, and listening to people testing out things, which is always a fun part of going there.  After I was done checking out the “environment”, and one guy who wasn’t paying attention to my camera, I went back to Mark and we started chatting.  Come to find out, his wife is a 3rd generation gradate of MICA.  Yay!  We talked a bit about what she and her artistic family had done, things that were going on around Baltimore, and a festival happening this week that I didn’t even know about.  I asked if I could snap a pic of him, and he was happy to do so.  Double yay!  I’m always so nervous thinking about asking people for their portrait, and I have no idea why.  It’s not a big deal to me to be told “no”, but for some reason I’ve always been apprehensive about it.  So check it out, and enjoy my favorite music spot, and the portrait. 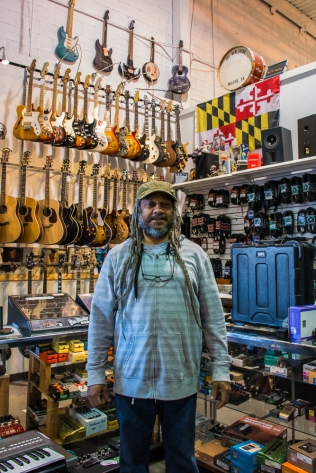