So I decided to do a little switch-a-roo on which photo challenge I’m working with.  I’m still going to stick to the main one for the most part, but am taking lead from Jenna Martin’s photo challenge for this one.  Week 7 for the other challenge  just hasn’t worked itself out yet, but I wanted to keep the ball rolling.

Black and white — because you really can never have enough of these types of images.  I know, I know, I just did a Black and White Landscape post a few weeks ago, but oh well.  This one is going to be a little landscapey also, but it’s going to include two of my favorite things:  my newly learned panorama skills, and vacation 🙂

While sadly, I’m back in class, in the cooler Maryland climate, I still have all my warm memories of Florida from…well….Monday, and plenty of pictures to edit.  On of my favorite little places to go while I’m there is Sanford.  It’s a cute little lake front town with shops and a walk way right on the water.  Of course, it’s also one of my favorite photo places while I’m there, so I was snapping away last week.

The weather was a little gloomy my first day there, but I have to say, I think it made for a good backdrop and added a little drama.  You know I’m always looking for the old and abandoned, and I pass plenty of that whenever I’m in Florida.  While Sanford isn’t the place for that, per sey, they do have these old docks, which are kind of falling apart and are too far away for anyone to reach.  They’re useless, essentially, and I love them.  Sanford also has really great, old, trees, filled with Spanish moss, so I feel like that kind of follows the old and abandoned theme, don’t you? 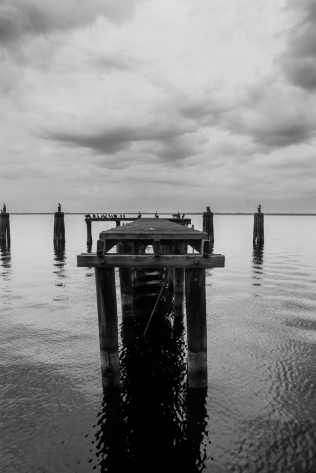 and the vertical version

It’s also fun to see all the different wildlife that comes to one little place.  There’s the usual suspects – the ducks and the Ibis — but then there were some new ones.  The “Common Grackle” made an appearance, and in great numbers.  I’ve never seen them at my little duck feeding spot before, but they definitely knew where the food was at!  There were swarms of them, and while they were “singing”, it became pretty clear as to how they got their name; they were pretty squawky.  At least what they lack in subtlety they make up for in beauty.  They were a deep black, but with patches of iridescent feathers that shined in the sunlight.  While you’re losing the interesting colors in these black and white photos, the shine comes through quite well.  I’m sure I’ll share some colorful versions of these photos sooner or later, anyways 🙂  So while I’m missing Florida, and busy planning my next vacation, enjoy the photos!

swirling around the lake

swooping in to catch some food