Ok, so I’m not off to the best of starts here, but I have been snapping away, and have plenty of ideas!  For this week’s theme, Landscape, I thought I would do something a little out of the ordinary.  I was visiting a friend last week in Florida, so of course, I took plenty of beach pictures, but decided that I should do something a little different.

Ever since this past summer, I have been dying to do some night beach pictures.  Each year when I go to Ocean City with the family, I spend a lot of time out on the balcony at night because you know, I’m up all night and don’t sleep like a normal person.  This year, there were a number of nights that were especially clear, so you could see all of the stars.  I was dying to go out on the beach at night and try my hand at some beach-astrophotography, but I forgot to bring my tripod along, so I was out of luck.

While in Florida last week, the same kind of clear skies kept popping up, so I was a little obsessed with getting some night pictures at the beach.  I ran out one of the first nights I was there and bought a mini travel tripod, and was ready to go.  So, of course, it was cloudy and rained for practically the rest of the time I was there, particularly at night.  Lucky for me, I did get one clear night before I left, and I tried to make the most of it!

After walking around and catching some cool sunset/cloud/moon/seagull pictures, which I’m sure you’ll see soon, we headed over to some shops and walked around until it got dark.  I popped out my mini tripod and got to it once the time was right.  I have to say, I’m one of those people who don’t heed warnings, and I probably should; when the mini travel tripod says that it has a weight limit, it really does.  Of course when buying this, I knew that my camera was over the limit, but I also thought that it wouldn’t really matter.  I mean, the thing just needs to sit there, right?  How unstable could three, advertised as “sturdy”, legs be?  Pretty wobbly, to be honest, but that’s my fault too.  So, after a few shaky test shots, and the wind not working in my favor, I held on to my camera ever so slightly and took a couple 30 second exposures of the beach at night!  I’m happy with what I got, but was hoping for something a little better, since I’ve been dreaming of this for months!  But with one idea down, I have another night shot that I can’t stop thinking of now….

When originally thinking of something for this theme, and driving the back roads around my friend’s place in FL, we kept passing these wide open fields with just a few palm trees scattered around.  That’s what I was thinking of for this…the palm trees in silhouette with the sky lit up around them, stars sparkling… but I’ll have something to look forward to during my next trip!  I also tried my hand at a little more editing than I usually do for one of these shots, so I have better planning/more editing practice to look forward to also.  In the mean while, I’m happy with these, but can’t wait to do more!  So enjoy my star-scape, which I’ve slid in to this landscape theme.  I kept a little of the beach in there, so it counts! 🙂 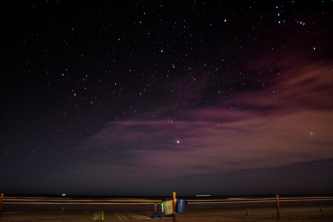