Mouthwatering.  You know, I was going to write something else about a little ride around the government farms, as opposed to writing about this week’s topic.  Once I started thinking about it, I realized I would be writing something that would fit into the “mouthwatering” category, but from a slightly different perspective.

Often times when stuck on an idea, I’ll consult a dictionary or thesaurus to truly understand the meaning of the word, and the different ways it may be applied.  I know what the most common thing which people refer to mouthwatering as, but there has to be more to it, right?  So I consult my faithful friend.  As per Merriam-Webster:

1. arousing to the appetite.

Appetite.  Eat.  Food.  Now, like I said, taking pictures of food is not really my thing.  I do it for fun, if I’m out with friends at my favorite place, but mostly for my cupcakes, so it’s business.  By the time I’m done with a huge baking project, or filling a large order, though I know they’re delicious, I don’t have the slightest temptation to take a bite of those cupcakes.  I also don’t have much of an appetite as of late, so thinking of something truly moutwatering is meeting me with thoughts of food that disgust me instead.  It makes me feel totally disinterested, losing my appetite even more; the opposite of mouthwatering.  So what am I supposed to do?  Thinking of the “attractive” description from the last time I looked up the word, I kept reading…

First thoughts: ok, it’s saying pretty much the same thing as before; something which is tempting and completely attractive.  Second thought, that’s not exactly what this is saying.  Appealing, something that looks like a good idea, something that “people like”, or is “pleasing and attractive”.  Hmm, well, I suppose that’s a little different, but tantalizingly, that’s what got me.  Another definition for you – tantalizing: possesses the quality that arouses or stimulates desire or interest, also (and here it got me): mockingly or teasingly out of reach.  Bam.  There it is.

So I’m not here to “educate” you on a few vocabulary words, it’s just my strange thought process.  You’re smart people.  Sometimes I over analyze, which has negative connotations, but other times, it’s not a bad thing to do.  When I saw that, I knew exactly what was mouthwatering to me.

I had a lot more hope at the beginning of the year than I do at this moment.  Yeah, boo hoo, I know but it’s been a rough road, and instead of things looking up, I think I’ve completely driven off the path, and am lost in the woods, in the middle of the night, with creepy-crawlies and mysterious noises in the shadows.  Sure, “it’s always darkest before the dawn”, but I can’t “see the light at the end of the tunnel”, because my night, to my surprise, seems to be just starting.

One of my biggest regrets that I have after going through this year of unemployment is that I didn’t do more with my time.  Sure, I’ve done some productive little projects, finished school, and a few other things, but I had to be responsible.  One of the big things that I wanted to do was travel.  Anywhere.  Far away.  By myself.  But I thought, no, you can’t do that.  What would your parents say?  What would people think?  It’s a crazy idea, isn’t it?  Well, let me just tell you — people aren’t always going to like what you’re going to do.  More often than not, they’re just plain not going to like what you do.  Partner that with a side of “people will also judge you and form opinions about you regardless of what you do”, and in retrospect, I don’t see why you don’t just do what makes you happy.  I should have run when I had the chance.

I have been independent, haven’t asked for help, and have taken care of my self for the last 12 years.  Sure, that may seem like just a small amount of time, but when there are people who are my age, or older, and are still clinging to their parent’s homes and paychecks, I consider it a big win.  I haven’t worked in a year — this is crazy to me — but I’ve taken care of myself, paid my rent, haven’t missed a bill, and taken care of my household…alone.  Now that I’m out of options, and needing help, all I’m met with is judgement.  Apparently I’ve been terribly irresponsible, unrealistic, unmotivated, lazy, inconsiderate, owing people money, not paying my bills, not taking care of myself, and have no grasp of what the “real world” is about.  Seriously?  It can be a painful process when you learn about how the people who love you view you, and don’t really know you at all.  What’s even more painful to realize that I have to move out of my little oasis which is my apartment and move in with those who place the harshest judgement, conjured nearly all from assumptions and lack of knowledge.  There’s nothing more that I want than to take one of those trips right now, to run away, if not only for a little while.  I do not want this to be my reality.  If you asked me a year ago if there was anything worse than working where I worked, I would have clearly, hands-down, without a doubt, in a heart beat said no.  Ask me today….well, I would still say no 🙂 ….but this would be a close and growing second.

Sometimes when things seem really grim, and the walls are closing in, I drive.  I take the long way home, I go pick up a friend, I drag myself out of the house just to take a drive to Starbucks and back, I take a loop around the beltway, whatever.  It doesn’t matter.  When I’m feeling particularly out of it, and just want to drive really slow and kinda veg out but still see things, I head over to the government farms.  I know, it sounds pretty weird, especially if you’ve heard me talk about it before, and how goat man lives there, but it’s not that creepy, most of the time.  I used to drive past them every day to and from work, and it was such a calming ride, which I seldomly had the chance to enjoy.  Now, I mosey on over there whenever I like, mostly around sunset, sometimes around sunrise, and drive about two miles per hour.  I gaze up at the trees, looking for birds, and stare out into the fields, looking for deer and other wildlife.  It’s just the pleasing little countryside plopped down in the middle of our busy area, but you wouldn’t know it once you’re in it.  One of my favorite additions to the government farms over the recent years are the flowers.  I can’t imagine they’re gaining any useful information from these flowers.  I actually think they are intentionally planted and grown to just make the drive around the farms all the more pleasing; they’re placed around the main roads, not near any of the buildings, and don’t serve an obvious purpose aside from aesthetics.  So, after a call from my dad saying there was a new field of the typical wild flowers blooming (they were all yellow, which was new), and having eyed-up a small field of bright red poppies for many days (that was new an exciting to see), I decided to take a little trip and finally take my camera along.  I was also in the mood for a little mental check out, so it was good timing.

What’s ironic was the weather and the way these photos turned out.  It was pretty stormy that day, and really hot, so even more storms were on the way.  It was also later in the day, so the light wasn’t exactly ideal.  I suppose it’s fitting, in that this is a bitter-sweet escape.  The most mouthwatering thing I can think of is getting away, but I in no way can do that now, and feel trapped.  It’s sometimes all-consuming, sometimes hopeless dreaming, but always tantalizing; just out of reach.  Enjoy my mini escape, the drop on the palate, just a taste.  This may seem like a far away place, serene and peaceful, but my reality is just around the corner. 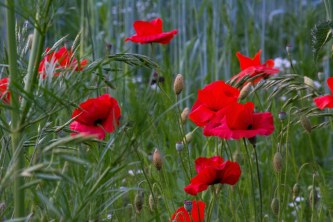 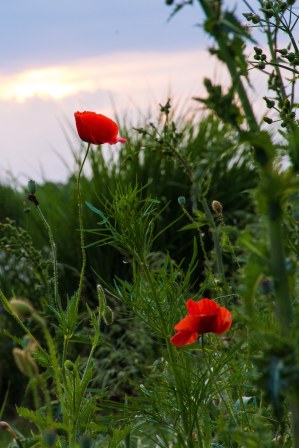