Ok, so it was kind of dark, and not stormy, though another winter storm is apparently coming through tonight (very unenthusiastic “yay”).  Though I was hoping that the weather would cooperate, which it did in the way I was hoping, I didn’t think the cold would have such a bad effect on my camera.  I trudged out in the cold and ice-covered snow blanket which is my parent’s back yard, and after only snapping a few pictures, my camera stopped working!  Terrible.  Luckily, it was just the bitter cold, and nothing permanent.  Literally the moment I went inside, it was working just fine.  So like me, I suppose my camera prefers the spring/summer months, and wants nothing to do with this never-ending winter that we’re having. 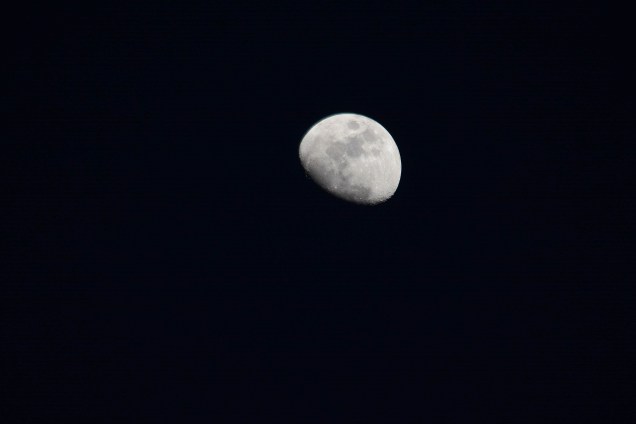 So, even though the picture of the moon has nothing to do with this week’s challenge, long exposures, it’s what I started with for the night.  Not the greatest of pictures, but I’m happy with it being my first successful, and detailed, picture of the moon.  You can even see the craters — how exciting 🙂  In reading countless articles on how to successfully capture stars and star trails, I was surprised to come across an article describing how to successfully capture an image of the moon; you need a fast shutter speed.  It’s contrary to what I would have always thought, since naturally, when shooting at night, I would always be inclined to have a very slow shutter speed, but the logic was there.  Taking a picture of the moon is like taking a picture of the sun — it lights up the night sky, so in order to get any type of detail in  your image, you have to account for the enormous amount of light it’s reflecting, even if it is dark outside and it doesn’t appear that way.

So once I got that pic, I moved on to the true task at hand.  I was determined to get some star pictures, regardless of what my camera had in store for me.  Even though they aren’t the Milky Way in all it’s glory, there are stars in these pictures!  With the amount of light pollution in the neighborhood, it’s nearly impossible to get a quality image with the details of our solar system.  When you figure in that my camera needs a sweater or something to function for more than five minutes in this winter weather, it looks like things are really impossible….until it warms up outside.  Until then, I’m happy with finally capturing some stars in my images, even if it did take a little more post production work than I typically like to do.  Summer time, I’ve just added one more reason to the list of why I can’t wait to see you again. 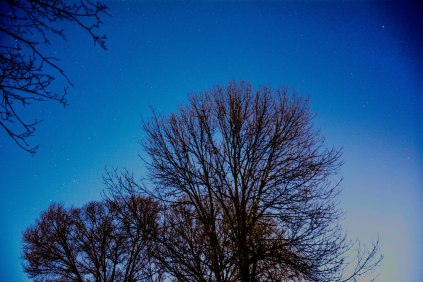 just over the roof top

the moon and the stars 🙂

One thought on “It Was a Dark and Stormy Night…”